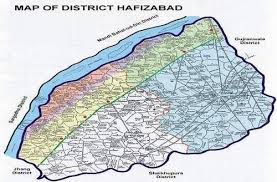 How was the foundation of District Hafizabad laid?  In this context, three different references are quoted in the books of History. It is commonly, said that in the era of Emperor Jalaluddin Muhammad Akbar, there was no sign of population at this place, where now District Hafizabad is situated. Once King Akbar, came to this region for hunting and accidentally his water storage ran out. He ordered his army men to search water. During their quest for water, they saw smoke rising over some trees. They went there and found that a Dervish was absorbed in meditation. With due reverence and gestures, the soldier asked the Dervish for water. Dervish understood their gesture and asked them to take away the water-skin tied with the tree of Wun. The soldier hastily untied the water skin and presented it to the king; whereupon, the king inquired from the soldiers as to how they had found the water in the wilderness. The soldiers told him the whole story. The king was very pleased and ordered them to ask the said Dervish about his greatest wish and fulfill the same, upon which the Dervish asked them for the construction of a city. Hence the present city of Hafizabad was founded and was attributed to the name of the Dervish, Hafiz; the word “Abad” was added to it later on.

According to another reference, the very king visited this territory for hunting and went astray from his companions. During search for his companions, he felt very thirsty. Suddenly, his eyes caught sight of rising smoke. He took that way and noticed that a party (of devotees) had encircled a Dervish. The king requested for water, whereupon, a herd of female deer offered their milk. Thus the king quenched his thirst with the milk of the female deer. The King thanked the Dervish and also asked about his greatest wish. The name of the ”Dervish” was Hafiz; so, in acknowledgement of his courtesy and hospitality, this city was named as Hafizabad. In the era of Mughals this region earned a great name. But during the reign of Ahmad Shah Abdali, it was devastated.

According to third tradition, this city was founded by Hafiz Muhammad Bhatti who was a courtier of king Muhammad Shah. He attributed the name of this  city to his own name. During the   Mughal regime, it flourished, but in the reign of Shahjehan, it fell a prey to their brutalities and remained deserted for some time. At last, left over population re-established it. Most of the city was owned by Kapoor and Chopra family who migrated to India in 1947 after partition, and were replaced by the Indian Muslim immigrants. In 1849, it was given the status of Tehsil and on 1st July 1993, its status was raised to that of a District. Before this, it was a Tehsil of Gujranwala district. It has Tehsil Sub-division Pindi Bhattian as well. It includes in Police Region Gujranwala. 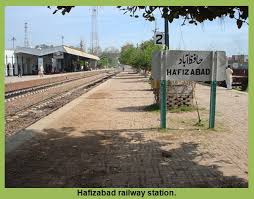